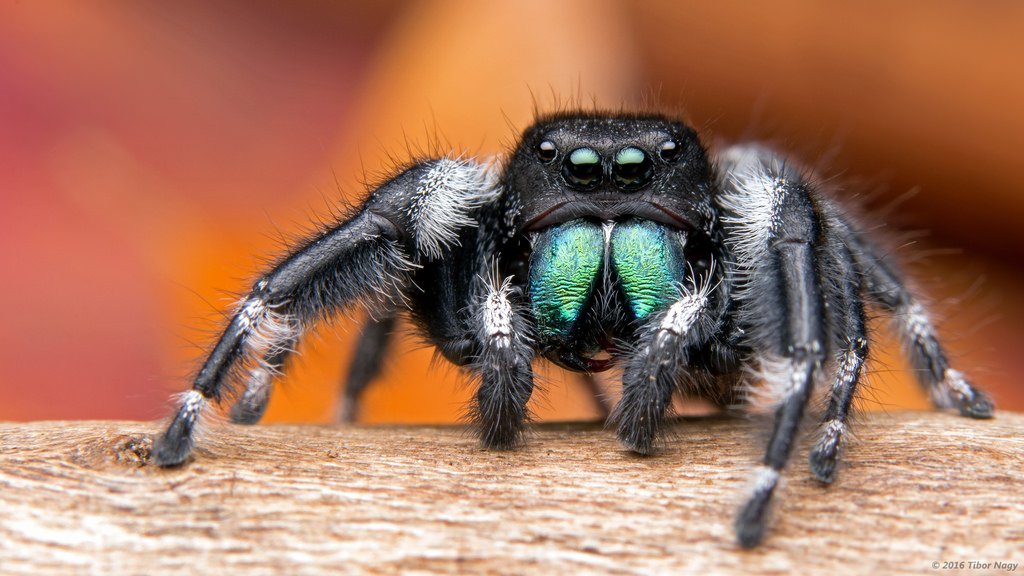 Halloween is such a fun and spooky time of year. What better time to hunt for creepy-crawlies than Autumn and what else is as creepy as a spider?

Although spiders may seem creepy, they are beneficial creatures, feeding on many of the

insects that we consider pests. Spiders are also quite interesting and can be fun to watch. They also come in a variety of colors; like the black and silver of the Bold Jumper with its shiny metallic green mouthparts, or the orange and yellow-green of the Marbled Orb-Weaver.

What is it that makes spiders so creepy though? Is it their legs, they have eight of them? Spiders legs don’t operate the same way that ours do, they don’t have muscles. Instead, they use pressure to force liquids in their body to move their limbs. Is it their sticky webs that most of us have at some point been tangled in? Some spiders make their webs in corners, especially darker corners which is definitely kind of creepy. Others string their webs up between trees and bushes. Spiders use organs located on their abdomens called spinnerets to create their web. Spiders make two kinds of webs; one is a strong webbing that is used for climbing, building, and to anchor their webs. The other is super sticky and is what they use to catch their prey. When you see a spider on its web, it is walking on the strong anchor web to get to its prey that is stuck on the sticky web. Sometimes we can unexpectedly walk through these and it can seem to be tough to get untangled. Creepy? Yes.

Do spiders creep us out because some are considered deadly? All spiders are venomous, but only a handful are harmful to us here in the United States and none are considered deadly. In fact, only 50 deaths by spider bite were reliably confirmed worldwide in the 20th century. Most spider bites are only as bad as a mosquito bite or at worse a bee sting. Only the Black Widow Spider and the Brown Recluse are seriously dangerous in the United States and rarely result in death. Like many fears, our fear of spiders likely comes from an ancient urge to keep us safe. At some point long ago, our primitive ancestors had a run-in with a long-gone spider and that fear lives in us today.

Autumn is prime spider hunting time. Spiders have spent all summer eating and growing and, in some cases, have gotten quite big. They’ve finished mating and are either starting to over-winter or approaching the end of their life cycle.

One spider to search for now is the orb weaver. They range in color from brown to orange to reddish, some are even green! Most have interesting patterns on the back of their abdomens that almost make these spiders seem ornamental. Orb Weavers make webs of strong, sticky material. Their web is made of some of the strongest known materials on Earth! You can often find them easily in late summer and through the fall hanging between trees and bushes. If you are lucky and find a web, be careful with it. Is the spider in it? If not, look around the edges of where the web hangs. You’ll find the spider hiding nearby, often hiding out in a curled up leaf. If you give it a gentle nudge, the spider will likely return to the center of its web. Don’t touch, remember that all spiders can bite, just look. Notice its coloration, are its colors dull or bright? Do you see any patterns or spots? Find one of the threads that anchors the web. You can gently, very gently push or pull on it. Do you feel how strong it is? Now, if you want to get a good view of the webs pattern you can carefully mist it with some water. You’ll need a clean spray bottle filled with clean water. Set the nozzle to mist and spray over the area of the web. The sticky web will collect water droplets, giving you an amazing view of the spider’s hard work. Be sure and thank the spider when you are done; for sharing its web and for eating all those pesky mosquitoes!